Smith Cogeneration developed, financed, and is the majority owner of PowerSmith. The PowerSmith Cogeneration Project is the first natural gas-fired combined-cycle cogeneration plant built and operated in Oklahoma. The 110 MW facility was completed on time, within budget, and has established a proven track record of performance and reliability.

The Project was designed and constructed by General Electric.

Part of the reason that the PowerSmith Cogeneration plant has been so successful has been the excellent relationship between General Electric and PowerSmith. PowerSmith and GE work very closely, and are supported by GE's worldwide network, ensuring all phases of the project proceed smoothly, from start of construction to reliable plant operation. The Project achieved commercial operation in September, 1989.

General Electric is performing operations and maintenance of the facility under the terms of the Power Purchase Agreement. 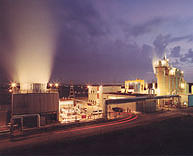